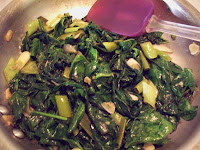 I tried ramps last night for the first time. The spinach recipe I wanted to make called for red onions, but the market is full of spring vegetables (i.e. ramps) so I decided to substitute. We enjoyed this recipe. Check out the link to the original recipe because it contains three variations – salad version, baked potato filling, and this wilted version.

Heat the vinaigrette in a skillet over medium-high heat until boiling. Add garlic slices and cook 2 minutes. Add ramps and cook an additional 2-3 minutes. Gradually add spinach and toss until wilted.
Posted by The Purple Cook at 5:43 AM